Accept All And Continue

We and our partners use technologies, such as cookies, and process personal data, such as IP addresses and cookie identifiers, to measure the performance of this website and content, and derive insights about the audiences who saw content. Click below to consent to the use of this technology and the processing of your personal data for these purposes.


THE FLIGHT OF EAGLES:
USAAF Evasion In Occupied Europe during December 1943 The Flight Of Eaglesbook.php?book=5&booktitle=the-flight-of-eagles-usaaf-evasion-in-occupied-europe 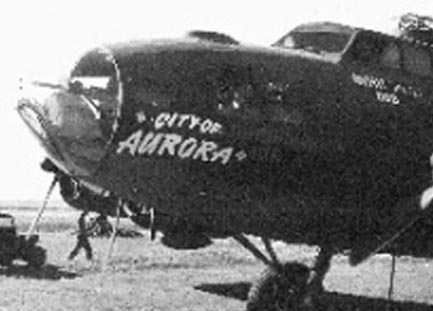 This B17F purchased by citizens of Aurora also carried the additional title of "Our Nel" and, at a later date, was emblazoned with the pin up girl of its tail fin. It may also have carried the title "Maverick" at some point and it is not known if the original War Bond title was still in place or had been removed.

It was originally assigned to the crew of Maj Arch Dewey, a resident of Aurora, Illinois. It was Dewey, along with Donald Frazier, who conceived the idea of naming the plane to enhance support for the local War Bond Drive. Through the efforts of William Willett the Lions Club of Aurora became the sponsor of a $200,000 target to purchase the equivalent of the B17F bomber. In just 17 days, a total of $211,000 was raised.

The bomber was christened in Florida before heading off the North Africa via Puerto Rico, Belem and Natal, Brazil. After some delays en route the plane and crew were despatched to take part in the Tunisian Campaign, flying its maiden combat sortie on 31st March 1943. Later missions took the Fortress to targets in Italy and by its 50th mission it had never aborted and was still flying on its original four engines.

On its 51st mission on 7th Sept 43, City of Aurora was hit badly by flak which severely damaged the ailerons, forcing the pilot, Warren Whitmore, to cut the two starboard engines in order to try to maintain level flight. It continued to lead the formations back to their bases in North Africa. When the pilot tried to reduce speed to enable his crew to bail out the plane kept turning over on its back so the crew jumped at a speed of 175mph, causing serious back injuries to them all. Although the pilot attempted to direct the aircraft towards a mountain to crash it kept climbing and diving, almost crashed into a field hospital before finally nose diving into the ground near Oudna.

The Lions Club of Aurora, on hearing the tragic news, immediately began another fund raising effort, this time for $326,000 to purchase another bomber. Commissioned in May 1944, this B17G survived hostilities.